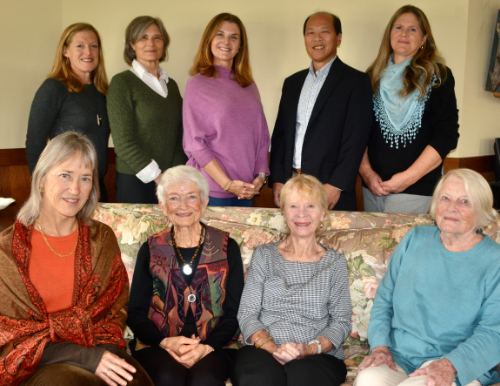 Sandy Blauvelt (President)—A Larkspur resident for nearly 50 years, Sandy has been involved in myriad community projects as a volunteer and as a member of the Parks and Recreation Commission. As a long-time aide to former Marin County Supervisor Hal Brown, she helped to implement his emphasis on neighborhoods.

Joan Lundstrom (Secretary) – In more than 50 years as a resident of Larkspur, Joan was the first woman to be elected to the City Council and was re-elected to the council and served as city mayor seven times. She helped to organize Larkspur’s first Town Meeting and led citizen efforts to purchase the King Mountain and North Ridge Open Spaces, to plant trees and flowers in the Historic Downtown, and to create the first bike/pedestrian pathways.

Molly Wuthrich (Treasurer) – Molly has lived in Larkspur since 2003. After a 20-year career in investment banking, she volunteered to help raise money for the local schools, including acting as President of the Larkspur-Corte Madera Schools Foundation (now known as SPARK) for two years.

Kristin Abbott – A community resident since 2000, Kristin has worn many hats as a volunteer in public schools .  Her activities have ranged from running hot lunch programs to serving on PTA executive boards within the Larkspur Corte Madera School District.  Kristin chaired the successful LCMSD Parcel Tax Renewal “Measure A” campaign in 2016, and is on the Redwood High School Foundation Board.

Laura Anderson – Laura moved from Boston to Larkspur in 2003 with her husband and three children.  Since then, she has been actively involved volunteering in the local public schools.  Among other responsibilities, she has served as Neil Cummins PTA President, Hall Site Council Member, Redwood High School Foundation Board Member, and five years as a Tamalpais Union High School District Trustee.

LCF Board of Directors at the 2020 Heart of Larkspur event. (missing Larry Chu)

Jody Coker – Jody has been an integral part of the community since she moved here in 1995. Beginning with the Corte Madera Larkspur Mother’s Club, she has volunteered for many community organizations including the Larkspur-Corte Madera School District, the Redwood High School PTA, the Redwood Foundation Allocation Committee, and the Larkspur Centennnial Committee.

Larry Chu – served on the Larkspur City Council for 16 years – including three terms as mayor – and represented the city on boards and committees at the city, county, and state levels. Larry has lived in Larkspur since 1988. He has worked with the community’s youth as president of the Marin Council of the Boy Scouts and as a Little League coach.  He has served on the board of the California Council of Parent Participation Nursery Schools and the Twin Cities Cooperative Preschool.  He was president of the Baltimore Park Homeowners Association. Professionally, Larry has worked for more than 40 years for financial service firms in a variety of roles. He’s currently working for the Federal Reserve Bank in emergency management.

Sheri Mowbray Sheri has been an active resident of Larkspur since 2000.  She founded and ran a local media business, Mogo Interactive, here in Marin for nearly twenty years.  Sheri has served our schools community in a number of ways, including Neil Cummins PTA executive board membership, multiple parcel tax and bond campaigns, and six years as a trustee on the LCMSD Board of Trustees.