More than 100 citizen volunteers who devote time to various Larkspur groups ranging from nonprofits and schools to city agencies and departments attended  the second annual “Heart of Larkspur” event at the American Legion Hall on March 9.

Co-sponsored by the Larkspur Community Foundation (LCF) and the City of Larkspur, the celebration drew high praise from both volunteers and organizations looking for more help.  Attendees praised the networking opportunities for citizens eager to learn about volunteer opportunities.  Some folks signed up immediately to go to work.

Redwood high school senior Landon Gregg, who recently completed an Eagle Scout Project refurbishing the basketball court at Heatherwood Park, was introduced. He received a $1,000 grant from the Foundation for his project.

A certificate of appreciation was given to Steve Nicol by the Larkspur Community Foundation in recognition of his family’s 52 years of community service in operating Red Robin Catering and carefully maintaining their historic structure to help downtown Larkspur retain its landmark status.

The evening concluded with a raffle of items contributed by Larkspur merchants.  Raffle contributors were: Equator Coffee, Lark Theater, Perry’s, Rulli’s and the Rustic Bakery. In addition, “Larkspur Past and Present, A History and Walking Guide” were given to attendees. 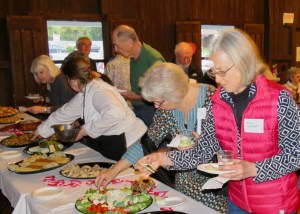 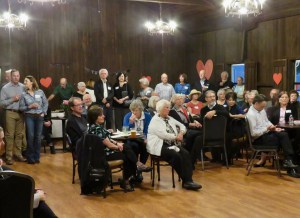